The scene was set last November in the church of St Stephen’s Walbrook in the City of London as candles adorned the pillars, and the audience, some of whom had been part of the Lord Mayor’s Procession earlier that day, waited for the choir to enter.

I was so glad we had chosen the church as it had its own links to the Great Fire of London, which we were commemorating in our performance. The church had been rebuilt by Christopher Wren after the fire, and lay not far from the monument to the victims. The church also enabled us to do the concert in the round, meaning that the audience formed a circle around the central font. That gave Myriad plenty of opportunity to use the space creatively in our presentation of the words and music from the time of the fire, something we are aiming to do more and more as we explore different ways of presenting our favourite music. 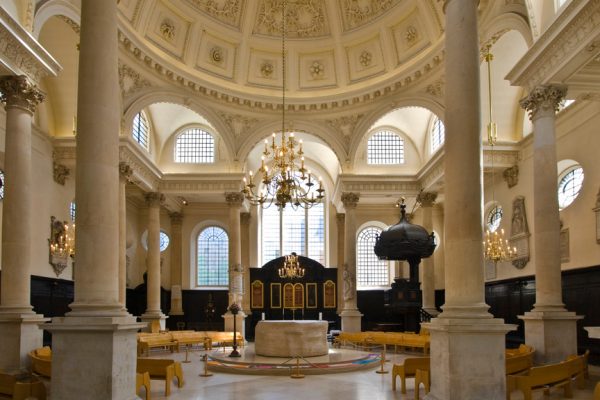 Entering with ‘London’s Burning’, which was helped along by the audience, the story of the fire began with the first reading by John Hocking, who throughout the night enlightened us with stories from the time of the fire from figures such as Samuel Pepys and John Evelyn, all of which had been carefully chosen by soprano Melanie Mehta.

The music ranged from pieces with texts associated with fire set by composers such as Gesualdo and Monteverdi through to present-day Morten Lauridsen, as well as pieces that would have been heard in London at the time of the fire. We were grateful to have been joined by Keith Bramich on tam-tam at the end of the second half for our performance of John Tavener’s rarely-performed work ‘The World is Burning’. This wonderful, brooding work featured a semi-chorus at one end of the church, with the main choir at the other, all bound together by bass Stephen McCarthy’s powerful bass voice as the figure of Christ.

It was a pleasure for me to work with all of the musicians and John, to bring about this moving commemoration of the 350th anniversary of the Great Fire of London.

This site uses Akismet to reduce spam. Learn how your comment data is processed.