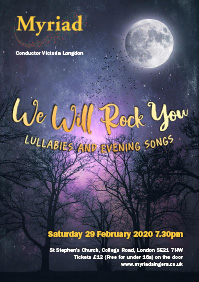 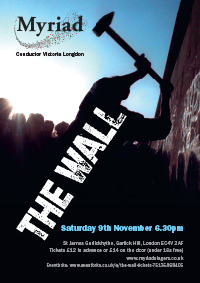 9th November 1989, the fall of the Berlin Wall:
A moment in history of particular relevance today in a world where tangible and intangible walls are being constructed around us.

This concert will include spoken word, and lighter music released in 1989 such as Billy Joel’s And So It Goes. The programme will be a mix of light and dark; of music and storytelling, and will serve as a poignant reminder not just of the dangers of erecting walls of all kinds, but also of the everyday lives which continue around them. 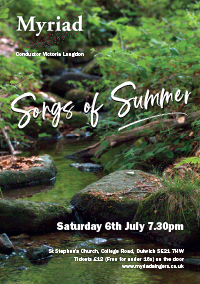 Myriad presents a glorious celebration of all things summery from clear and gentle streams, hills and dales to light, gold and butterflies.
Conductor: Victoria Longdon 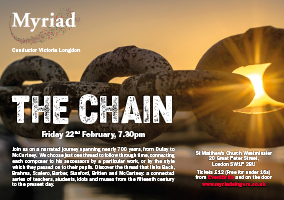 Myriad stage a narrated journey spanning nearly 700 years, from Dufay to McCartney. We choose just one thread to follow through time, connecting each composer to his successors by a particular work, or by the style which they passed on to their pupils. Discover the thread that links Bach, Gounod, Brahms, Scalero, Barber, Stanford, Britten and McCartney: a connected series of teachers, students, idols and muses from the fifteenth century to the present day.
Conductor: Victoria Longdon 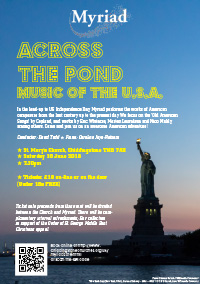 In the lead-up to US Independence Day, Myriad performs the works of American composers from the last century up to the present day. We focus on the ‘Old American Songs’ by Copland, and works by Eric Whitacre, Morten Lauridsen and Nico Muhly, among others. Come and join us on an awesome American adventure!
Conductor: David Todd, Piano: Caroline Jaya-Ratnam 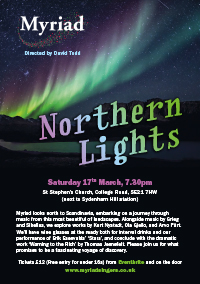 Myriad looks north to Scandinavia, embarking on a journey through music from this most beautiful of landscapes. Alongside music by Grieg and Sibelius, we explore works by Kurt Nystedt, Ola Gjeilo, and Arvo Pärt. We’ll have wine glasses at the ready both for interval drinks and our performance of Erik Esenvalds’ ‘Stars’, and conclude with the dramatic work ‘Warning to the Rich’ by Thomas Jennefelt. Please join us for what promises to be a fascinating voyage of discovery. 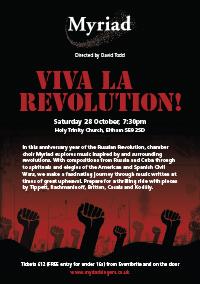 In this anniversary year of the Russian Revolution, chamber choir Myriad explores music inspired by and surrounding revolutions. With compositions from Russia and Cuba through to spirituals and elegies of the American and Spanish Civil Wars, we make a fascinating journey through music written at times of great upheaval. Prepare for a thrilling ride with pieces by Tippett, Rachmaninoff, Britten, Casals and Kodály.


A seasonal offering of music and poetry around the theme of love. 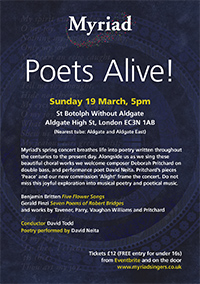 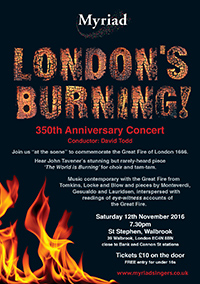 A commemoration of the Great Fire of London 1666. Works included John Tavener’s stunning but rarely-heard piece ‘The World is Burning’ for choir and tam-tam and music contemporary with the Great Fire from Tomkins, Locke and Blow and pieces by Monteverdi, Gesualdo and Lauridsen. The concert was interspersed with readings of eye-witness accounts of the Great Fire.

The French Connection
February 2015
Sacred and Secular Choral Music of the French High Renaissance was performed by Myriad under the direction of Ghislaine Morgan. The concert featured works by Le Jeune, Sermisy and Josquin amongst others and took place at 7pm on Saturday 28 February 2015 at St Peter’s Church, Liverpool Grove, Walworth.

The Archangels: Gabriel, Raphael, Uriel and Michael
September 2014
The inspiration for this concert came from the wealth of beautiful choral music composed about the Archangels and the themes with which they have each become associated. With each theme, motifs were chosen that best evoked the spirit of the Archangel.

We use cookies to ensure that we give you the best experience on our website. If you continue to use this site we will assume that you are happy with it.Ok